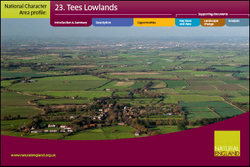 The Tees Lowlands National Character Area (NCA) forms a broad, open plain dominated by the meandering lower reaches of the River Tees and its tributaries, with wide views to distant hills. The large conurbation around the Lower Tees and Teesmouth contrasts with the rural area to the south and west, which is largely agricultural in character. The mosaic of intertidal and wetland habitats within the Tees Estuary are internationally designated as Teesmouth and Cleveland Coast Special Protection Area and Ramsar site, due to their importance for waterfowl. These areas are in close proximity to heavy industry, which has developed due to the estuary’s strategic location close to; mineral reserves, a network of main roads, railways and Teesport. Industrial installations form a dramatic skyline when viewed from the surrounding hills. Early successional grasslands and scrub have also emerged on previously developed land; these brownfield sites have significant biodiversity value.
Further information