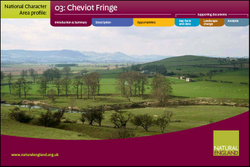 The Cheviot Fringe National Character Area (NCA) is a tranquil, undulating, lowland landscape, framed by the Cheviots NCA to the west and the Northumberland Sandstone Hills NCA to the east. The western edge falls within the Northumberland National Park and encompasses the edge of the Cheviot Hills.
The importance of glacial processes in shaping this landscape is shown by the extensive array of glacial lake and fan deposits, sinuous ridges, eskers, kames and kettle holes. Weathering of the underlying bedrock combined with the widespread blanket of glacial and alluvial deposits have resulted in fertile soils that support the agriculture which dominates this area, and the river valleys provide much of the North East region’s sand and gravel resources.
The vales to the south are a patchwork of arable farmland, pasture and meadows with the regular field pattern still strong, delineated by hedgerows punctuated with trees. To the north, arable cultivation dominates and the fields are flatter and larger with fewer hedgerows. Conifer blocks and shelterbelts are prominent in the landscape with broadleaved woodland predominantly along watercourses.
Further information