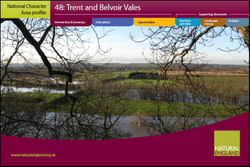 The Trent and Belvoir Vales National Character Area (NCA) is characterised by undulating, strongly rural and predominantly arable farmland, centred on the River Trent. A low-lying rural landscape with relatively little woodland cover, the NCA offers long, open views. Newark-on-Trent (generally referred to as Newark) lies at the centre with Grantham, Nottingham, Lincoln and Gainsborough on the peripheries. The southern and eastern edges of the Vales are defined by the adjoining escarpments of the Lincolnshire Edge and the Leicestershire and Nottinghamshire Wolds NCA. To the west, the escarpment of a broad ridge of rolling landscape defines the boundary with the neighbouring Sherwood and Humberhead Levels NCAs. The area’s generally fertile soils and good quality agricultural land have supported a diversity of farming over a long period but, because of this, little semi-natural habitat remains. The powerful River Trent and its flood plain provide a strong feature running through the landscape. It is the greatest biodiversity resource, being a major corridor for wildlife moving through the area and supporting a variety of wetland habitats. It also provides flood storage as well as large amounts of cooling water for local power stations.
Further information