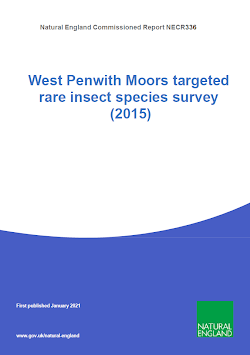 This field survey was commissioned by Natural England. The aims of the survey are listed in the specification for the West Penwith Moors targeted rare insect species survey.

Natural England is gathering evidence to support the potential notification of key areas of semi-natural habitat and associated features in the West Penwith Moors area of west Cornwall as a Site of Special Scientific Interest (SSSI).

Survey work is currently being carried out to underpin Natural England’s biodiversity evidence base for the moorland, known locally as rough land. Key semi-natural habitats occurring in the survey area include lowland heathland and associated acid grassland, mires and flushes, scrub and bracken. For the purposes of survey work the area has been divided into 57 separate numbered survey areas, some of which are contiguous, with individual survey areas ranging in size from c.3ha to c.157ha. Some survey areas are currently under positive management while others are unmanaged.