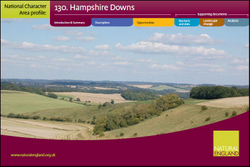 The Hampshire Downs are part of the central southern England belt of Chalk, rising to 297 m in the north-west on the Hampshire–Wiltshire border. A steep scarp face delineates the Downs to the north, overlooking the Thames Basin, and to the east, overlooking the Weald. The majority of the area is an elevated, open, rolling landscape dominated by large arable fields with low hedgerows on thin chalk soils, scattered woodland blocks (mostly on claywith-flint caps) and shelterbelts. To the east hedgerows are often overgrown and there are larger blocks of woodland. A fifth of the area is within the North Wessex Downs Area of Outstanding Natural Beauty and 6 per cent in the South Downs National Park due to the scenic quality of the landscape. Flower- and invertebrate-rich remnants of calcareous grassland remain mostly along the northern scarp and on isolated commons throughout.
The Chalk is a large and important aquifer; hence groundwater protection and source lnerability designations cover most of the area, and catchment sensitive farming – to control pollution, run-off and soil erosion – is a vital activity. The aquifer feeds several small streams flowing north and east, but the dominant catchment of the area is that of the rivers Test and Itchen, which flow in straight-sided, relatively deeply incised valleys across most of the National Character Area. The Itchen is a Special Area of Conservation and, with the Test, is designated as a Site of Special Scientific Interest. These rivers, with the watermeadows, peat soils, mires and fens of their flood plains, are the most important habitats of the area. The valleys are also home to the main settlements, the local road system and important economic activities such as watercress growing and fly fishing.
Further information