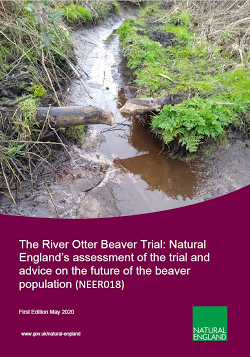 A five year licence was issued by Natural England in 2015 to enable the capture and legal re-release, following health and genetic testing, of beavers that had been living wild on the River Otter, Devon. The licence legitimised the presence of the beavers, enabling an authorised trial of a beaver reintroduction. Subsequently, the River Otter Beaver Trial (ROBT) was set up with a project management group to oversee and deliver all aspects of the ROBT and to observe and study the colonisation of a lowland English River catchment.

The objective of this report is to assess the outcome of the ROBT to inform the decision on whether the beavers are allowed to remain within the River Otter catchment on expiry of the licence.

At conclusion of the initial five year licence a Science and Evidence report was published by the ROBT’s Science and Evidence Forum, giving an overview of the research undertaken as part of the ROBT. That report, supplemented by associated peer-reviewed papers, commissioned reports, additional evidence and previous reports published during the ROBT, was used in Natural England’s assessment of the trial. This assessment considers whether the ROBT objectives have been met; whether the licence has been adhered to; and whether the International Union for the Conservation of Nature (IUCN) guidelines for reintroductions and other conservation translocations have been followed.