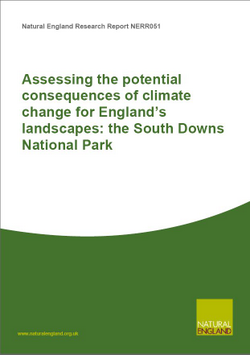 This study considered the vulnerability of the natural environment to climate change in the South Downs National Park. This landscape of national significance is dominated by the chalk spine which stretches from Winchester in the west to the white cliffs of Beachy Head in the east, rising gently from the South Coast Plain before ending with a north-facing scarp. To the north the older sandy rocks of the Lower Greensand and soft shales of the Wealden Clays are exposed. The Low Weald is characterised by broad, low lying and gently undulating clay vales. Rivers from the Low Weald and the Wealden Greensand cut through the chalk to form deep river valleys and broad floodplains. The area is rich in wildlife, supporting a wide range of important habitats such as chalk grassland, heathland, floodplain grazing marsh, ancient semi-natural woodland and coastal habitats.

The vulnerability of the natural environment in the South Downs National Park was assessed by considering how it is exposed to changes in climatic conditions, how sensitive it is to those changes (including its ability to adapt, which can be influenced by its current condition) and how much scope there is for conservation management to promote adaptation. This assessment of vulnerability is based on the best available scientific knowledge of how climate change might affect the natural environment and discussions with experts. The assessment considered both landscape assets (biodiversity, heritage, soils and geology) and its ecosystem service functions.