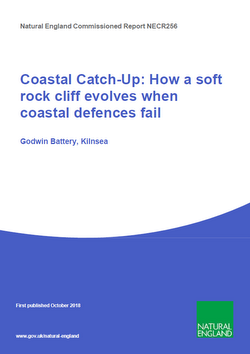 This report was commissioned to examine how the collapse and deterioration of the Godwin Battery coastal defences and associated military structures at Kilnsea on the Holderness coast have impacted on the evolution of the adjacent shoreline. This example is unusual in the way defences have been allowed to fail, with it is now possible to appreciate how a soft cliff coastline responds to this failure and erosion.

Particular emphasis is given to the evolution to the shoreline as it was influenced first by (1) active coastal defence structures, then (2) redundant coastal defence structures, and currently (3) mass concrete ruins. Expert opinion is provided regarding the level of adjustment required for the frontage to reach a new equilibrium by ‘catching up’ with the adjacent undefended coast, and future evolution.

Historic maps and photographs were collected and analysed alongside coastal erosion monitoring data as well as contemporary evidence gathered on site, to build a detailed chronology of shore evolution since the construction of the Battery. The resulting data was used to predict the extent to which the remaining structures will continue to influence coastal evolution in the future, and the likely timescales involved. The evidence from this report will improve understanding in relation to the following designated coastal sites:

This information will also inform Natural England’s views on the management of soft cliff coasts generally, improving the advice that we give to others.