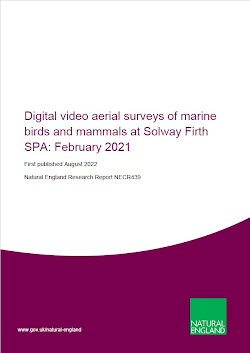 The Solway Firth Special Protection Area (SPA) is a large estuarine and marine site first designated in 1992 under the European Union ‘Birds Directive’ (2009/147/EC) with qualifying interests for the site including multiple waterfowl, wader, and gull species.

HiDef Aerial Surveying Limited (‘HiDef’) were commissioned by NatureScot and Natural England to undertake a high-resolution digital video aerial survey (DAS) for marine megafauna, ornithological and human activity within the Solway Firth SPA, and to undertake analyses to derive density and population estimates for all species identified, with a focus on selected qualifying bird species.

A single survey was flown in February 2021 with 2.5km-spaced transects across the SPA, covering a total area of approximately 1,357km2. The data was further divided into a near-shore area (extending up to 2km from the coast) and a marine area (excluding areas within 2km of the coast). Approximately 20% coverage of the survey area was achieved.

Supplementary shore-based count data of roosting birds provided by Natural England, for sites along the English coast, were collected 10th-15th February 2021. Summed peak counts for each species per shore-based survey site were used to supplement population and density estimates from the DAS for common goldeneye, goosander and cormorant.