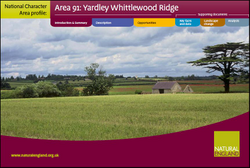 The Yardley Whittlewood Ridge National Character Area (NCA) is a low and gently undulating limestone plateau commonly referred to locally as the Ridge. It runs in a south-west to north-east direction between the nearby towns of Northampton and Milton Keynes. The Ridge is more distinct in the south-west where it rises from the adjacent low-lying claylands. From the top, the land slopes away gently in most directions, giving long views over the surrounding countryside.
The Ridge contains a variety of semi-natural habitats, including ancient woodland, wood pasture and parkland, hedgerows, lowland meadow and flood plain grazing marsh. It is a well-wooded landscape with a historic feel stemming from the former Royal Hunting Forests of the 13th century around Yardley Chase, Salcey and Whittlewood forests. The Ridge retains a high proportion of ancient woodland of national importance designated as Sites of Special Scientific Interest and supports a wide range of species, particularly scarce species of butterfly such as the white admiral and wood white.
Despite being close to Northampton, Milton Keynes and Towcester, the Ridge retains a rural character due to its sparse population and lack of major settlements. A suburban feel is brought to some parts of the NCA by transport infrastructure such as the M1, communication masts on higher ground and formal recreational facilities such as Silverstone Circuit and Santa Pod Raceway which have had an impact on tranquillity. However, the large number of historic houses, designed parkland landscapes and use of local limestone in village buildings give a strong sense of both place and history. The area offers numerous opportunities for leisure and quiet recreation, with the parkland and woodland sites in particular being popular destinations for local communities and visitors from further afield.
Further information