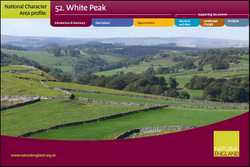 The White Peak National Character Area is a raised, undulating limestone plateau deeply incised with steep-sided limestone valleys. It has a strong sense of place arising from the effect of the underlying geology on landform and its influence on natural and manmade landscape features such as caves, crags, drystone walls and traditional buildings. The dales are of significant wildlife value, particularly because of their flower-rich limestone grassland and ash woodland, and many contain clean, clear rivers which support species such as
white-clawed crayfish, bullhead, lamprey and dipper.
The plateau is rich in archaeology, from Neolithic burial mounds and stone circles, such as Minninglow and Arbor Low, to the remains of early lead workings. There are distinctive historical landscapes with well-preserved ridge and furrow and networks of field boundaries that fossilise medieval field systems around villages such as Chelmorton.
The settlement pattern is primarily of small nucleated villages and isolated farmsteads, along with the market towns of Buxton and Bakewell and the spa town of Matlock Bath. The majority of settlements are on the plateau, with a few small settlements centred on the 18th-century textile water mill buildings in the dales and the major towns in the valleys around the edge of the plateau. The area is particularly popular for recreation, with a good rightsof- way network and multi-user trails, such as the Monsal Trail and the Pennine Bridleway, and many opportunities for rock climbing, caving and fishing. It is easily accessible for a large population from surrounding urban areas and also receives visitors from all over the world.
Further information