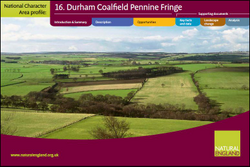 The Durham Coalfield Pennine Fringe National Character Area (NCA) is a transitional landscape between the North Pennines NCA to the west and the Tyne and Wear Lowlands NCA to the east. It is formed by a series of broad ridges, separated by river valleys, with a strong west–east grain. Some 3 per cent (2,252 ha) of the NCA lies within the North Pennines Area of Outstanding Natural Beauty, and 204 ha falls within the North Pennine Moors Special Area of Conservation and Special Protection Area, designated for its habitats (including dry heath, blanket bog and old sessile oak woodland) and upland breeding birds (including golden plover, curlew, dunlin, hen harrier and merlin).
The west is more upland in character, with large, open, regular fields bounded by drystone walls or fences, and is primarily used for sheep and cattle grazing. In the east the farmed landscape becomes more mixed, with arable crops grown on the richer land, and more irregular fields divided by hedges rather than walls. Networks of hedges and strips of woodland in river valleys and alongside streams, combined with shelterbelts and large conifer plantations, give parts of the area a well-wooded appearance. A number of major rivers run through the area, including the Wear and Derwent, and their tributaries, Browney, Deerness and Gaunless.
Further information