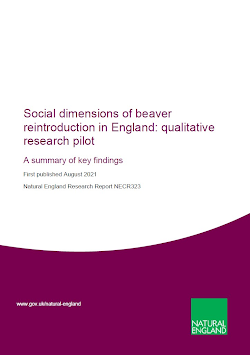 Context
A five-year licence was issued by Natural England in 2015 to legitimise the presence of beavers that had been living wild on the River Otter, Devon, enabling an authorised trial of a beaver reintroduction. In 2020 a decision was made by ministers, following the conclusion and assessment of trial results, to permit those free-living beavers to remain and continue to expand their range naturally. This has resulted in widespread interest in reintroducing beavers to new areas of England.

Over the last 18 months, Natural England has conducted a review of the available evidence on the interactions of beavers with the natural and human environment in relation to England. The purpose of that review was to determine whether the evidence suggests it is appropriate to reintroduce beavers more widely in England and to highlight key evidence relevant to decisions on further beaver releases. In conducting the review, Natural England identified that the social science evidence related to beaver introduction was growing but limited. The evidence suggested that stakeholders and the public were generally supportive of beaver reintroductions. However, it also suggested that there is potential for conflict related to beaver reintroduction in certain contexts and amongst certain groups including landowners and farmers in specific geographies, anglers and commercial fisheries and specific communities living close to reintroductions.

Scope
The purpose of this research commission is to better understand the potential for conflict, including by exploring some of the more challenging issues identified in the literature.

The purpose of this study was not to understand how widespread views are, nor whether they are representative of the stakeholder population. The purpose of the study was to explore the depth of feeling, and the potential for conflict, amongst those who had direct experience of beaver reintroduction, including those that may have been negatively affected.

Professor Alex Inman was commissioned to conduct a small qualitative research pilot to explore issues to help inform future research needs. Annex 1 sets out the rationale in commissioning this pilot study to use qualitative methods.