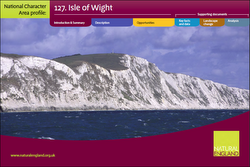 The Isle of Wight is an Island situated south of England, separated from the mainland by the Solent, with the English Channel forming its southern boundary. Covering an area of 380 square kilometres, with a coastline that runs for 92 kilometres, it is England’s largest Island. The chalk spine crossing from east to west stretches out at the western tip in a series of three chalk stacks known since medieval times as the Needles. The Island exhibits, at a small scale, the key characteristics of much of lowland England, from farmed arable coastal plains to pastures and woodland, and from steep chalk downs to diverse estuarine seascapes and dramatic sea cliffs and stacks.
Almost 50 per cent of the Island falls within the Isle of Wight Area of Outstanding Natural Beauty, divided into five separate parcels, and around half of the coastline is recognised as Tennyson and Hamstead Heritage Coasts. The Island has a range of internationally, nationally and locally important nature conservation sites, including Special Areas of Conservation, Newtown National Nature Reserve, 41 Sites of Special Scientific Interest and 395 Local Wildlife Sites (Sites of Importance for Nature Conservation) that are recognised for their important habitats and species, including maritime cliff and slope, coastal and flood plain grazing marsh, lowland heathland, saline lagoons, intertidal mudflats, coastal sand dunes, intertidal flats and seagrass beds, and coastal vegetated shingle. The Solent and Southampton Water is designated as a Ramsar site and as a Special Protection Area, as it supports internationally important numbers of wintering waterfowl and various rare invertebrates and plants.
Further information