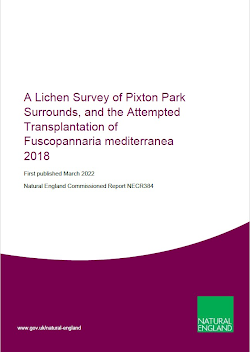 The lichens of Pixton Park were surveyed by Wolseley & O’Dare (1988) and in more detail by Sanderson (2017). Sanderson considered that the flora was of international significance, and the site was worthy of SSSI (Site of Special Scientific Interest) status. An ancient tree survey showed that mature and veteran trees occurred in areas outside the 2017 survey. The present survey was undertaken to assess the value of these surrounding areas and to consider their relationship to the 2017 survey area.

The 2017 survey found the rare Fuscopannaria mediterranea to be confined to a single oak, which had recently died. Since the likelihood of this species colonising another tree is extremely low, an attempt was made to transplant it to another tree.