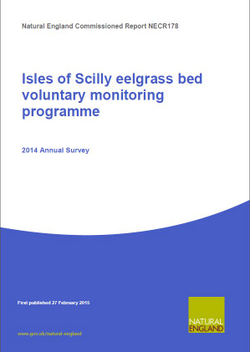 Seagrasses are globally dispersed along coastlines, covering approximately 0.3 to 0.6 million km2. However, they are currently in rapid decline worldwide, due to a range of anthropogenic impacts, disease and climate change. As a result, there is considerable interest in understanding the drivers of seagrass population dynamics. However, it has been rare for investigators to look at natural populations across many years. By repeating annual surveys at the same point in each growing season, in order to control for within-season variation, the longer-term effects of biological or environmental drivers of population dynamics can be quantified.

In this report, we present novel data from an ongoing, spatially replicated, annual study of a comparatively un-impacted temperate seagrass habitat, based around the Isles of Scilly, UK. Metrics include eelgrass (Zostera marina) shoot density, numbers of leaves per shoot, maximum shoot length, as well as semi-quantitative recording of signs of wasting disease and epiphyte cover on a leaf-by-leaf basis. Findings from the 2014 survey, as well as their place in continuous time series from 1996, are presented primarily in graphical form.