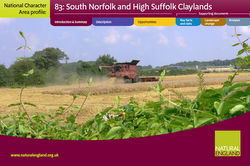 The South Norfolk and High Suffolk Claylands National Character Area (NCA) occupies a large area of central East Anglia stretching from just below Norwich in the north down to the River Gipping in the south. The area is bounded to the north by Mid Norfolk and The Broads NCAs and to the east by the sandy heathland of the Suffolk Coast and Heaths NCA. To the west the landscape merges into the drier and more open character of The Brecks NCA and to the south it meets the South Suffolk and North Essex Clayland NCA with its noticeably more undulating topography. ‘High’ Suffolk originally derives its name from the contrast between this formerly well-treed area and the openness of the adjacent areas to the east and west. Today it is probably better understood as meaning the high and predominantly flat clay plateau that dominates the character of the NCA. The plateau is incised by numerous small-scale wooded river valleys with complex slopes that in places are much unexpected for East Anglia. The underlying geology is chalk, which forms the principal aquifer, and shallow marine deposits overlain with glacial till, buried river gravels, lake sediments and bands of glacial outwash deposits.
Further information