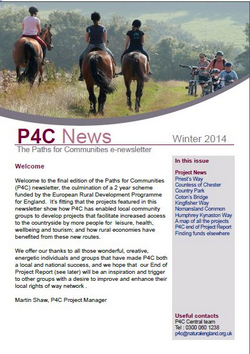 Paths for Communities (P4C) was a funding scheme set up to develop and enhance the network of public rights of way (PROW) in England in order to deliver benefits to rural areas. Local community partnerships were eligible to bid to Natural England for funds. The scheme closed in September 2013.

The aim of P4C was to encourage and support local communities to work with landowners to make improvements to the network of PROW. In all cases P4C projects needed to include some element of new PROW creation.

In most cases projects included an element of new bridleway creation but projects that included footpath creation alone were also considered where community and economic benefit was demonstrated.