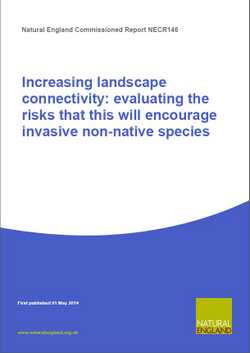 Increasing landscape connectivity to enhance the resilience of landscapes to climate change is a key adaptation principle, and is one of the most common forms of adaptation on the ground. Joining up landscapes was also one of the main findings of the Lawton Review as a means of ensuring coherent ecological networks.

At the same time an increasing threat from non-native invasive species has been identified as a developing threat to the natural environment and Natural England’s objectives from climate change.

Research into the spread of non-native species has demonstrated that certain aspects of connectivity may lead to an increased risk of spread, whilst in certain circumstances isolation and the introduction of barriers to spread (ie reduced connectivity) can be used as a conservation measure.

Conversely increasing connectivity through enhancing the habitat matrix has been suggested as a means of reducing the risk of invasive species by enhancing the resilience of native communities.

This project was therefore commissioned to investigate the potential conflicts and trade-offs between increasing connectivity to enhance resilience through enabling species to track climate change and reducing resilience through encouraging the spread of invasive species.

The findings of this research will help inform the design of ecological networks which in turn will help determine how and where we prioritise interventions such as habitat creation under the New England Land Management scheme, and biodiversity offsetting.