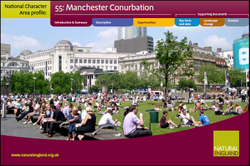 A number of settlements have grown and come together to form the Manchester conurbation, including Manchester, Salford, Stockport, Sale, Ashton-under- Lyne, Swinton, Altrincham, Stretford, Prestwich, Cheadle Hulme, Denton and Droylsden. The area is characterised by dense urban and industrial development, commercial, financial, retail and administrative centres, commuter suburbs and housing, interspersed with a network of green infrastructure.
The conurbation is centred on low hills, crossed by several river valleys that thread through the urban fabric. The geology is dominated by sandstones, overlain by thick deposits of glacial till. The underlying Permo-Triassic sandstones provide an extensive aquifer, contributing groundwater for a large number of industrial users as well as public water supply.
River valleys form important corridors of semi-natural habitats and natural greenspace – with open grassland, woodland and wetland – linking urban centres with open countryside. The industrial heritage now provides sites of wildlife interest in the urban environment. Canals that weave through the conurbation not only offer opportunities for access and recreation, but also form a network of wetland habitats. Sections of the Rochdale Canal, in particular, have been designated as being of international importance as a Special Area of Conservation (SAC). Woodland cover is generally low, but variable – and significant for such a heavily urban location. New areas of community woodland have been created in the Red Rose Forest and Pennine Edge Forest. Further information