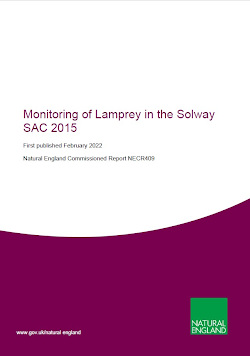 River lamprey (Lampetra fluviatilis) and Sea lamprey (Petromyzon marinus) are designated features of the Solway Firth Special Area of Conservation (SAC) and the Upper Solway Flats and Marshes Site of Special Scientific Interest (SSSI). Little is known about the species here, except that the Solway Firth provides an important migration route. The study aimed to provide up-to-date data on ammocoete populations and habitat of the Solway Firth river lamprey populations to inform condition assessment, and provided a preliminary assessment of condition. Standard electric fishing practice was followed as developed by the European Standards Committee, and the habitat was surveyed quantitatively in optimal and sub-optimal locations. Data collected from the surveys were collated and analysed to benefit the determination of condition status of lamprey in the Solway Estuary. All four catchments (Eden, Esk, Wampool and Waver) failed to comply with at least one JNCC target for habitat condition. This was generally due to low densities in optimal habitat and overall catchments. No catchment was in favourable condition status for Lampetra spp. and recruitment was variable across the four catchments. Impassable barriers did not appear to be affecting distribution, although further surveys are recommended near the barrier in Kirkby Stephen for the Eden catchment. Future surveys should include more sites within each catchment but should repeat the current sites to compare population traits over time. Future condition assessment should be carried out at least every six years, but due to lamprey reliance on yearly recruitment, if resources can be made available sampling should be undertaken on a yearly or biyearly basis.