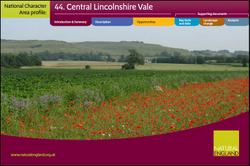 The Central Lincolnshire Vale National Character Area’s (NCA’s) tranquil, rural and sparsely settled landscape is largely used for agricultural production, mainly for the growing of arable crops, principally cereals. This is in spite of historically challenging soils and conditions. Its dominant ‘boulder clay’ derived soils underlain by mudstone bedrock lead to seasonably waterlogged conditions which, under natural unmodified conditions, support wet grasslands and woodlands; however, a history of agricultural improvement along with modern machinery and agrochemicals have transformed the land and vastly increased its productivity.
An imperceptible rise in landform across the centre of the NCA means that the northern half drains north into the River Ancholme and out to the Humber, while the southern end drains into the River Witham and The Wash. Most of this natural drainage pattern has been straightened, deepened and confined within steep embankments and the land drained – especially north towards the Humber. In contrast, pockets of wind-blown sand deposits (the Coversands) and river-derived sands and gravels (the Fen Edge Gravels) have led to localised contrasting landscapes where soils are sandy, acidic and infertile and heathland habitats are found along with some extensive coniferous plantations.
Further information