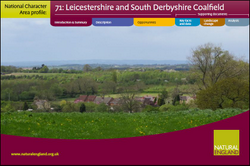 The Leicestershire and South Derbyshire Coalfield landform consists of a plateau with unrestricted views of shallow valleys and gentle ridges that become less pronounced in the south due to a layer of glacial till. To the east the land rises steeply, affording views of the Charnwood National Character Area (NCA). Ancient woodland straddles part of the boundary in the north, where the land falls away affording views of the wooded rolling landscape of the Melbourne Parklands NCA. The River Mease Site of Special Scientific Interest (SSSI) and Special Area of Conservation (SAC) forms part of the boundary with the Mease/Sence Lowlands NCA in the south-west and the Leicestershire Vales NCA forms a less visually defined border in the south.
The area has a developing woodland character, heavily influenced by work of The National Forest that covers the majority of the NCA and which aims to link the remnant ancient forest landscapes of Melbourne Parklands NCA in the north with those of Charnwood NCA in the east and Needwood and South Derbyshire Claylands NCA in the west.
The landscape is in continuing transition, from an unenclosed rolling landform that was extensively scarred by abandoned collieries, spoil tips and clay pits, to a matrix of new woodland, restored colliery sites, active brick pits and commercial developments that are woven into an essentially rural, agricultural landscape. Settlements consist of a mix of small hamlets, enlarged market towns and former mining settlements.
Further information