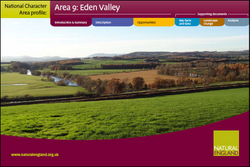 The Eden Valley National Character Area (NCA) in north-east Cumbria encompasses the broad valleys of the River Eden and its tributaries. The river contracts between wide flood plain areas to the steep, wooded Eden Gorge. It contrasts markedly with the scarp face of the North Pennines to the east, the Orton Fells to the south and the rugged upland fells of the Lake District to the west, and the NCA includes a small part of the North Pennines Area of Outstanding Natural Beauty.
The undulating landform is largely the result of material deposited at the end of the last ice age, moulded into the characteristic mounds of drumlins and eskers, and giving rise to fertile soils. This gives the valley its characteristic intimate blend of undulating mixed farmland with significant areas of woodland, farm copses, mature hedgerow trees, stone walls and historic villages. This sense of shelter and containment is enhanced by the juxtaposition with it’s wilder’ upland neighbours. The NCA is characterised by high levels of tranquillity.
The River Eden is one of England’s finest large river systems on limestone and sandstone. This fast-flowing river is of European importance for its habitats and wildlife, and flows northwards through the NCA, forming an important aquatic habitat corridor connecting to the Solway Firth. Strategically, this is also an important corridor: the valley hosts major transport routes between north and south, and historically was much fought-over borderland between England and Scotland. The remains of defensive structures from these turbulent medieval times are still evident in today’s landscape.
Further information