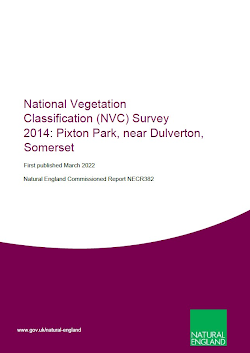 Pixton Park, which lies within the Exmoor National Park near Dulverton, Somerset, is an 18th Century landscape park, referred to as a 'deer park’ on the Ordnance Survey map of 1891, but containing remnants of earlier features. Today the site is a mixture of open grassland (some of which is still grazed by deer) and woodland (parts of which are thought to have developed relatively recently on former open wood-pasture).

A series of surveys has been commissioned at Pixton Park, the aim of which is to help assess the significance of the site for its wildlife habitats (particularly the parkland grassland and woodlands), invertebrates, veteran trees and lichens. The results will allow evaluation for possible Site of Special Scientific Interest (SSSI) status. The results of the vegetation survey are presented within this report.