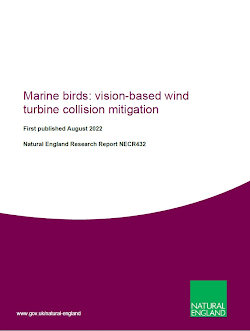 The recent expansion of the Offshore Wind sector has significantly increased the potential for collisions between seabirds and turbines and collision risk is now a major consenting consideration for Offshore Wind Farm (OWF) projects. The possibility of reducing those risks through a simple vision-based mitigation has the potential to help governments and developers accelerate the growth of OWFs to achieve renewable energy targets.

The report’s Appendix presents a review of the vision of birds, prompted by the findings of May et al. 2020 Paint it black: Efficacy of increased wind turbine rotor blade visibility to reduce avian fatalities which tested a vision-based turbine mitigation measure and found a 70% reduction in annual collision mortality in 19 bird species at a terrestrial location. The aim of the report is to extend this mitigation approach and increase its general applicability to birds at sea in a wider range of viewing conditions.

The review concludes that there is a justifiable ecological basis to believe that the principle of increasing the internal visual contrast of turbines through blade marking should benefit seabirds but that it is important to consider that differences in environments, such as light levels and weather conditions, may influence relative collision risk. As such, simple blade marking may not yield seabird collision reductions at rates recorded for white-tailed eagles at coastal wind farms. It is recommended that more complex markings of turbines should also be considered.

A mitigation measure is proposed involving modest changes to the appearance of wind turbines that can be implemented at the time of manufacture. The principle aim of this is to increase the conspicuousness of wind turbines across a wide range of viewing conditions such that a turbine can be detected by an approaching bird sufficiently early to allow change in their flight path and avoid collision.