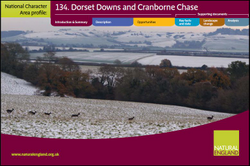 Forming the south-western limb of England’s Cretaceous Chalk outcrop, the Dorset Downs and Cranborne Chase National Character Area (NCA) lies across the counties of Dorset, Wiltshire and Hampshire, from east of Bridport to the outskirts of Salisbury. Dorchester and Blandford Forum are the largest settlements in what is a sparsely settled area of lowland England.
This strongly rural and agricultural NCA is characterised by large, open fields of pasture and arable, punctuated by blocks of woodland all draped over the undulating chalk topography. The NCA features one of the densest assemblages of prehistoric sites and monuments in Europe, with areas such as the South Dorset Ridgeway revealing some 8,000 years of human activity. The evolution of the chalk plateau of Cranborne Chase was fundamental to the development of the character of the northern part of the NCA.
Food production is the most visible service provided by the NCA. However, the provision of drinking water and the charging of the important suite of chalk rivers that flow southwards out of this NCA (via the chalk aquifer), are also essential services. The custodians of this NCA will face the challenge of continuing to meet demand for food production, while ensuring that ecosystems – and the services that they provide – are repaired and maintained.
Further information