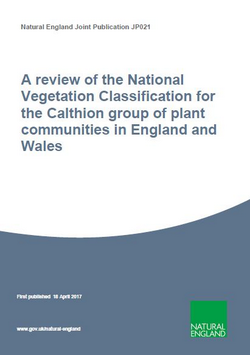 The Calthion alliance is the term used by European botanists to describe a group of plant communities found primarily on wet meadows and pastures across western and central Europe. In the British Isles, four communities defined by the National Vegetation Classification (NVC) are placed within the alliance. These are:

Although they can be species-rich, communities of the Calthion have received much less attention than the Alopecurus pratensis-Sanguisorba officinalis floodplain grassland (MG4,) possibly because they have no European conservation status and they contain few rare species. There is little information on distribution and variation within these communities. Estimates for the extent of MG8 range from 300 to 800 ha (Rodwell et al 2000). Further, the description of the MG8 community within the NVC is described by Rodwell et al (2000) as being 'one of the least satisfactory parts of the mesotrophic grassland section of the National Vegetation Classification’. The Floodplain Meadows Partnership Steering Group therefore identified a more detailed characterisation of these communities and an assessment of their distribution as a priority. Funding was thus secured to undertake a desk study, field survey and data analysis in order to define more precisely the Calthion communities in the UK. This is a joint publication with the Flood Plain meadows Partnership.