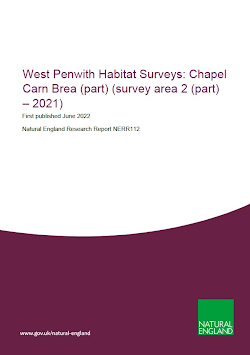 Land within Penwith Moors, Cornwall, is being considered for designation as a Site of Special Scientific Interest (SSSI) under the Wildlife and Countryside Act 1981. Chapel Carn Brea was originally surveyed in 2012 by Cornwall Environmental Consultants Ltd (commissioned by Natural England). That survey covered an extent of 23 ha but excluded a number of smaller parcels of land around the SE and SW edges of Chapel Carn Brea which have since been recognised as supporting semi-natural vegetation. To ascertain whether these land parcels meet the published guidelines for the selection of SSSIs a field survey was undertaken in October 2021. A walk-over survey was undertaken from which vegetation communities were identified and a rapid assessment of condition was undertaken consistent with Common Standards Monitoring. All plant communities present were mapped. Areas of lowland heath and lowland dry acid grassland were identified, and their condition assessed as unfavourable. This survey is one of many undertaken or commissioned by Natural England to provide the evidence required to identify those areas which should be included in an SSSI designation, to identify the features to be designated and to inform definition of the SSSI boundary. This report will also help to inform future site monitoring and to provide land management advice.