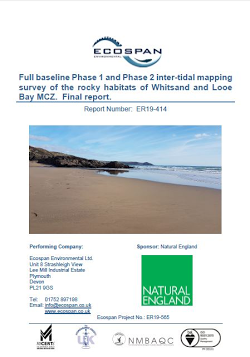 The Whitsand and Looe Bay Marine Conservation Zone (MCZ) is an inshore site located on the south coast of Cornwall which was designated in 2013 [1]. The landward site boundary follows the coastline along the mean high-water mark, from Hore Stone near Talland Bay in the west, to a point between Queener Point and Long Cove on Rame Head to the east. The seaward boundary is formed by a straight line across the bay, with a small extension jutting out to the south around Looe Island (Fig. 1). The site covers an area of 5217ha and is approximately 25 meters deep at the deepest point. At the extreme eastern end of Whitsand Bay the MCZ overlaps with the Plymouth Sound and Estuaries Special Area of Conservation (SAC) [2].
Whitsand Bay is a 6 km stretch of sand, shingle and rock, with gullies that have been carved by strong tides and cross-currents. The MCZ encompasses a range of habitats supporting a diverse array of marine life. The site contains intertidal and subtidal sand and coarse sediment habitats, as well as intertidal rocky habitats.
The intertidal rocky habitats of the MCZ are characterised by a high diversity of invertebrates such as sponges, bryozoans, anemones and sea squirts with the rocks around Hannafore in Looe Bay being especially rich in intertidal species. These habitats also support a high diversity of seaweeds. The rare giant goby (Gobius cobitis) has also been recorded in mid-shore rockpools within the MCZ and stalked jellyfish (Haliclystus sp., Calvadosia campanulata and Calvadosia cruxmelitensis) are also known to occur within this MCZ.