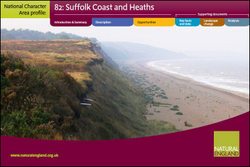 The Suffolk Coast and Heaths National Character Area (NCA) lies on the North Sea coast between Great Yarmouth in the north and the port town of Harwich in the south, forming a long, narrow band that extends between 10 and 20 km inland. Its inland western boundary is with the South Norfolk and High Suffolk Claylands and South Suffolk and North Essex Claylands NCAs, with projections up many small river valleys.
It is one of the driest parts of the country, with local rainfall typically only twothirds of the national average. The distinctive landscape character is a product of its underlying geology, shaped by the effects of the sea and the interactions of people. It is mainly flat or gently rolling, often open but with few commanding viewpoints. In many places, and especially near the coast, wildlife habitats and landscape features lie in an intimate mosaic, providing great diversity in a small area. Some 45 per cent of the area is designated as the Suffolk Coast and Heaths Area of Outstanding Natural Beauty (AONB), while the south-western tip along the Stour Valley also contains a small part of the Dedham Vale AONB.
Further information