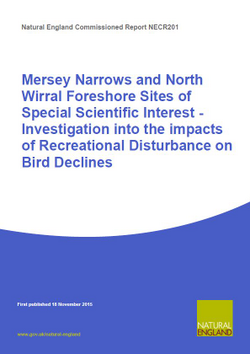 The report was commissioned because a recent report by the British Trust for Ornithology had shown that there have been sharp declines in key species for which the Mersey Narrows and North Wirral Foreshore Sites of Special Scientific Interest (SSSIs) were designated and it was suggested that these declines were caused by site-specific factors. Further to this, another report by the BTO suggested that high levels of recreational disturbance appeared to impacting on bird numbers. We therefore wanted to try to get a better understanding of the causes of the bird declines and find out whether they were in fact caused by high levels of recreational disturbance, in order to improve management of these sites. We will use the results of the study to discuss management options for the site with our partners, in particular Wirral Council, which may include suggestions for new signage and interpretation boards to raise awareness about disturbance to birds from recreational activities amongst the general public.