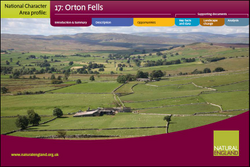 The Orton Fells National Character Area comprises a limestone plateau with a complex mix of limestone pavements, upland heath, and calcareous and acid grassland. The fells are open, exposed and sweeping, with long-distance panoramic views out to the skylines of the adjacent uplands – the Cumbria High Fells, the Howgills, the Yorkshire Dales and the North Pennines. Nine per cent of the NCA lies within the Lake District National Park.
The Asby Complex is an extensive Special Area of Conservation (SAC) designated for its karst features, particularly its long stretches of limestone pavement as well as its mix of acid and alkaline habitats; part of the SAC is also designated as a National Nature Reserve (NNR). Smardale Gill, with its ash woodlands and calcareous grasslands that support outstanding butterfly populations, is likewise designated as an SAC and an NNR. The predominant land use is livestock rearing, with some dairy farms, so that along with the rough grazing there are extensive managed grasslands in pastures and meadows defined by drystone walls on lower-lying land. Some of the best upland hay meadows can be found here, together with wide species-rich verges along the quiet straight roads, making it an exceptional experience to travel through the area.
Further information