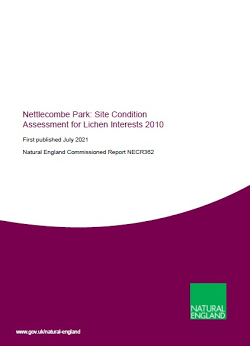 This report assesses the condition of the epyphitic lichen interest within the Nettlecombe Park Site of Speciial scientific Interest (SSSI). There are 3 important epyphitic lichen communities at Nettlecombe they are; the Lobarion alliance, the Lecanactidetum premnae assemblage and the Xanthorion parietinae community. The last assessment was undertaken by Pat Wolseley in 1996, that assessment indicated that the site was in good condition but also highlighted a number of potential threats. The main threats identified in this report come from shading and possible nitrogen inputs.

The outstanding lichen interest at Nettlecombe is mainly due to the relic status of the ancient oaks. Due to a lack of planting until ‘recent’ times there is now an age gap which is difficult to bridge; this combined with storm damage is a major concern to the long term lichen interests at the site.

The current lichen interests at the site are in favourable condition. There are two management issues requiring attention, one in compartment E concerns the degree of shading and a second issues concerns the increase in nitrophylous lichen species in compartment K.