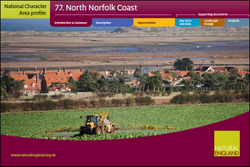 The flat, low-lying, open and remote coastal plain dominates the North Norfolk Coast landscape. The muted, changing colours of the salt marsh and the marram grass amid the sand dunes and the shallow channels of glistening mudflats, tidal flats, shingle banks and sea defence banks provide a variety of texture and detail, behind which the sea meets the sky providing long, sweeping views out to sea where recently installed wind turbines can be seen up to wide open skies. From the coastal plain the land becomes gradually more undulating as it rises up towards the coastal road and the higher ground behind. On the eastern part of the coast, from Weybourne, soft cliffs of glacial and pre-glacial material deposited on chalk extend towards Sheringham and form a prominent feature. This is a dynamic coast, comprising habitats of coastal salt marsh, coastal sand dunes, intertidal mudflats and sand flats, coastal vegetated shingle, reedbeds, saline lagoons and coastal and flood plain grazing marsh which are shaped by the coastal processes that act upon them and by human intervention: management and development, which both shape these fragile habitats. The profusion of marine and bird life and abundance of flora which these habitats support, such as grey and common seals, marine invertebrates, seagrass, little tern, Sandwich tern, common scoter, Brent and pink-footed geese, sea lavender, sea wormwood and rare natterjack toad provides an extraordinary environment and makes the area a special place for locals and visitors alike.
Further information