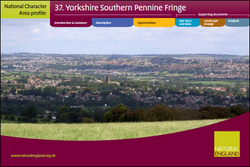 The Yorkshire Southern Pennine Fringe National Character Area (NCA) is a transitional landscape from the upland areas of the Southern Pennines NCA in the west through to the low-lying land of the Nottinghamshire, Derbyshire and Yorkshire Coalfield NCA to the east. The most striking aspect of the landscape is the mingling of predominantly ‘gritstone’ industrial towns and villages with the strong valley forms and pastoral agriculture of the Pennine foothills. The gritstone industrial buildings and settlements bring a sense of visual unity to the
landscape. The landscape is dominated by industrial buildings and structures such as factories, chimneys, railways and canals. Travellers crossing the NCA from west to east experience a change from pastoral treeless hill tops, where drystone walls are the predominant field boundary, to wooded valleys, where large urban settlements such as Bradford, Huddersfield and Sheffield are focused in the valleys and were built up around the former industries such as coal mining, steelmaking and the woollen industry. The World Heritage Site of Saltaire stands as an example model town built with the wealth produced by the industries prevalent in this area. In the east, settlements are separated by areas of arable farming with hedgerows and lowland meadows.
The NCA is characterised by steep slopes that are cut through by narrow rivers, notably the Don, the Calder, the Hebble Brook and the Colne in the north and the Sheaf, the Rivelin and the Loxley in the south near Sheffield, which open up into valleys on lower land. The river corridors provide links through the NCA from the uplands into the towns and cities in the valleys, supplying not only water for the large population in these areas but also opportunities for people to access and enjoy thenatural environment and for species movement through the landscape.
Further information