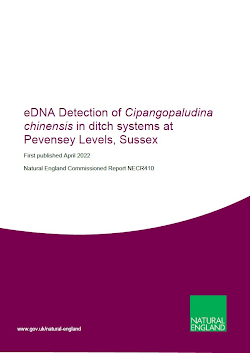 Biological invasions by non-native species are generally accepted to be one of the greatest threats to biodiversity world-wide. The direct cost to Great Britain’s economy has been estimated at £1.9 billion/year.

Pevensey Levels in southern England is a large wet grassland complex criss-crossed with freshwater ditches, much of which is designated as a Special Area of Conservation (SAC) and a Ramsar site. Invasive non-native species pose a threat to the site’s native biodiversity due to their potential to threaten native species, habitats or whole ecosystems.

Building on the approach of using environmental DNA (eDNA) to survey for freshwater vertebrates in the lentic environment, there has been increasing interest in using eDNA techniques to monitor freshwater invertebrate communities and in particular invasive non-native species. One species that Natural England is interested in detecting via eDNA techniques is the Chinese mystery snail Cipangopaludina chinensis. This snail is a problem invasive non-native species in many parts of the world and was first found within ditches at Pevensey Levels in 2018.

This project delivers important baseline data on the applications of environmental DNA technologies, specifically the development of species-specific eDNA assays and sampling of ditch systems to survey and monitor the spread of non-native molluscs.

This version has been amended November 2022 to correct primer and probe concentrations within the Methods section and Appendices as these were incorrect in the original version. The annealing temperature for the C. chinensis qPCR has also been amended in the Appendices due to a typo.