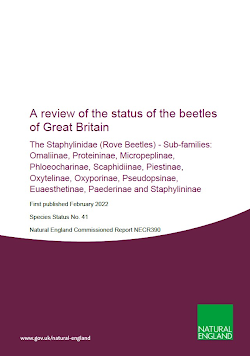 Decisions about the priority to be attached to the conservation of species should be based upon objective assessments of the degree of threat to species. The internationally recognised approach to undertaking this is by assigning species to one of the International Union for Conservation of Nature’s (IUCN) threat categories using the IUCN guidelines.

This report was commissioned to update the national threat status of beetles within selected sub-families of the Staphylinidae. It covers all species in the listed sub-families, identifying those that are rare and/or under threat as well as those which are non-threatened and non-native. Reviews for other invertebrate groups will follow.

The Species Status project provides up-to-date assessments of the status and extinction risk faced by individual species using the internationally accepted Red List criteria and guidelines developed by the International Union for Conservation of Nature (IUCN).

The current review reports 8 species which are extinct in Britain, 29 Threatened (Critically Endangered, Endangered or Vulnerable) and 17 Near Threatened. Detailed species accounts describe the known or likely threats affecting these species, which include the intensification of agriculture and consequent loss of permanent and semi-natural grasslands, the extensive use of toxic veterinary chemicals to control parasites, which reduces suitable dung habitats for many species, the loss of coastal habitats resulting from sea-level rise and increased storminess, and the decline of ancient trees and dead wood habitats which affects many wood-boring species.

An accompanying spreadsheet (see 'NECR390 Edition 1 Macrostaph Summary Table.xslx’) provides additional text and data, including notes on the distribution and ecology of a large selection of species.