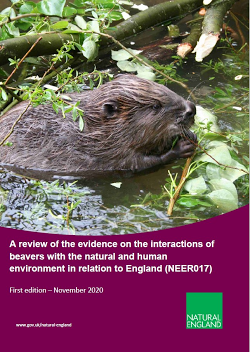 The European Beaver (Castor fiber) was once widespread across Europe and northern Asia. It became extinct in England around the 16th century due to overhunting for its meat and fur. Beavers are ecosystem engineers and, as a keystone species, are able to restore wetland ecosystems and produce a mosaic of diverse riparian habitats.

A five-year licence was issued by Natural England in 2015 to legitimise the presence of beavers that had been living wild on the River Otter in Devon, England, enabling an authorised trial of a beaver reintroduction. In 2020 a decision was made by Ministers, following the conclusion and assessment of trial results, to permit those free-living beavers to remain and continue to expand their range naturally. This has resulted in widespread interest in reintroducing beavers to new areas of England.

The purpose of this review is to inform decisions relating to reintroducing beavers more widely in England. It does this by reviewing evidence, relevant to England, on the interactions of beavers with the natural and human environment alongside the guidelines for reintroductions and other conservation translocations published by the International Union for the Conservation of Nature. This review focuses on new evidence available since an earlier feasibility assessment published by Natural England in 2009 and the subsequent publication in 2015 of an extensive review carried out by Scottish Natural Heritage. The aim is to identify and assess key evidence across a range of natural and socio-economic factors relevant to decisions on further beaver releases in England.