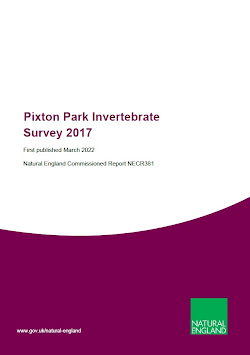 Pixton Park is a historic deer park with an important collection of veteran and ancient trees. Such trees tend to have significant interests for both epiphytic (lichens, mosses and liverworts growing on tree bark surfaces) and saproxylic (fungi causing dead woody tissues to decay and the invertebrates which feed on the products of that decay) species assemblages. These trees are known to be of significant interest for epiphytic lichens but there had been little or no investigation of their saproxylic interests until very recently. Surveys were commissioned by Natural England during 2014 and 2015 in order to assess the current significance of Pixton Park as ancient parkland, for its wildlife habitats, invertebrates and veteran trees. The aim of the surveys was to provide evidence in support of evaluation for possible Site of Special Scientific Interest (SSSI) status. Only exploratory work on the invertebrates was however possible at that time and this work was expanded during the 2017 field season.