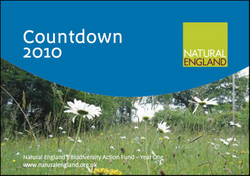 The Countdown 2010 Biodiversity Action Fund was launched on 15 December 2005 as a replacement for Defra’s Environmental Action Fund (biodiversity stream) which had been running since 1992. A variety of Voluntary Conservation Organisations (VCOs) were awarded £3.8 million from Defra to run 34 projects across all nine Government regions. The projects started in April 2006 and their aims cover direct enhancement of biodiversity, engaging people in conservation work and raising awareness of biodiversity among key stakeholders, community groups and the general public.
Further information