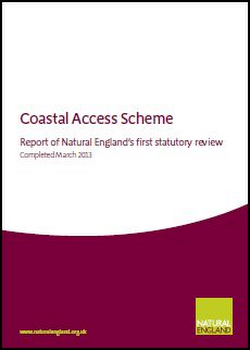 The Coastal Access Scheme (“the Scheme”) sets out Natural England’s approach to complying with its Coastal Access Duty under section 296 of the Marine and Coastal Access Act 2009 (“the 2009 Act”) to implement the England Coast Path and associated coastal margin.
The first version of the Scheme (NE268) was approved on 23rd March 2010, under section 298(2) of the 2009 Act. Section 299(2) of the Act required us to complete an initial review of the Scheme within three years of this, i.e. by 23rd March 2013.
We have now completed our Review, which is about the methodology set out in the Scheme rather than the coastal access legislation itself.
This report sets out how we conducted the Review and the key conclusions we arrived at, and explains the concluding steps towards approval by the Secretary of State of a revised Scheme implementing the relevant changes.
Further information

An Index which can be used alongside the approved Scheme is also available (see Related publications and products below).