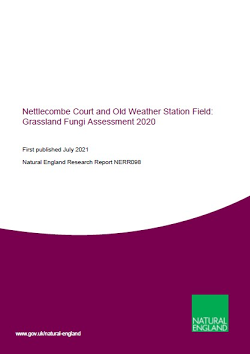 Nettlecombe Court is situated on the northern fringes of the Brendon Hills in West Somerset and lies within Exmoor National Park. The Court itself now functions as a Field Studies Centre, the grounds of which contain a series of formal old lawns and adjacent parkland habitat. Part of the landholding lies within Nettlecombe Park SSSI, an important example of an ancient deer park supporting a large collection of veteran trees with rich associated lichen and invertebrate communities. The Old Weather Station Field is situated approximately 1.5km south of Nettlecombe Court and has a north-facing sloping aspect.

The significance of the site for waxcaps and other declining grassland fungi was first highlighted by Richard Thompson whilst carrying out a series of waxcap grassland surveys for Somerset Environmental Records Centre (SERC) in the period 1997-1999.

Thompson’s report (2000) separately detailed the findings of surveys carried out at Nettlecombe Court and the Old Weather Station Field and showed that both sites were then of national importance for their waxcap fungi populations, with totals of 18 and 23 species respectively recorded. At that time the count of 23 waxcap species from the Old Weather Station Field was known to be the second highest in the county and was only exceeded by Pinkworthy on Exmoor. Furthermore the pasture was cited to support more “notable” grassland fungi species than any other site in Somerset. This latter statistic was based upon research by Maurice Rotheroe (1996) who had previously produced a list of species deemed to be most indicative of quality waxcap grassland sites in the UK.