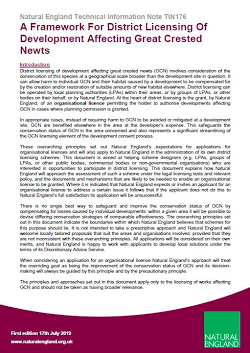 GCNs are widely distributed throughout lowland England. However the species has suffered enormous declines, with approximately 50% of ponds in the UK lost in the 20th Century and 80% of current ponds in a poor state. The current licensing system is focused on management to prevent harm on individual development sites rather than addressing the wider health of GCN populations. Our new district level licensing approach seeks to redress this balance, focusing on provision of GCN habitat in areas where surveys show it will most effectively connect and expand GCN populations. This new approach will increase GCN populations at a county level. It will also reduce delays for developers. Under the current licensing approach, developers who want to build on land which is home to GCNs need to trap and relocate the species before starting work. Seasonal restrictions, where these are not effectively planned for, can lead to delays and create uncertainty over the costs and scheduling of planned development. Under district level licensing, developers no longer need to do this. Instead developers can make a conservation payment which will cover creation or restoration of ponds in areas away from the development. These areas, mapped by Natural England, represent the best places for newts to thrive and habitat created here will be maintained and monitored for 25 years, all funded by developers. This new licensing system is hoped to substantially replace the traditional licensing regime for GCN.

There is no single best way to safeguard and improve the conservation status of the species by compensating for losses caused by individual developments via a district level licensing scheme: within a given area it will be possible to devise differing conservation strategies of comparable effectiveness. This Framework document sets out overarching principles for Natural England’s expectations for applications for organisational licences and will also apply to Natural England in the administration of its own district level licensing schemes. This document is aimed at helping scheme designers (e.g. Local Planning Authorities (LPAs), groups of LPAs, or other public bodies, commercial bodies or non-governmental organisations) who are interested in opportunities to participate in district level licensing. This document explains how Natural England will approach the assessment of such a scheme under the legal licensing tests and relevant policy, and the documents and mechanisms that are likely to be needed to enable a licence to be granted.