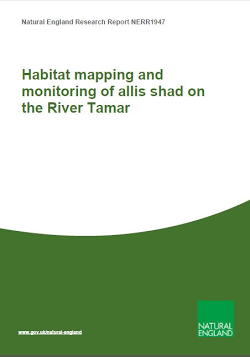 Allis shad (Alosa alosa) is a migratory (anadromous) fish species of the herring family which matures in the sea and migrates to freshwater to spawn. Though once widespread around the UK, allis shad populations have declined significantly in recent decades and the River Tamar is now the only known spawning site in the UK for the species. The Tamar estuary is within the Plymouth Sound and Estuaries Special Area of Conservation (SAC), where allis shad is a designated species. Previous studies have shown that allis shad routinely spawn in the tidal reaches of the upper Tamar estuary, an observation unique to the Tamar. Natural England commissioned a survey of available allis shad spawning habitat on the Tamar and monitoring of the timing and location of allis shad spawning. The detailed study undertaken by the Environment Agency has led to improved understanding of spawning habitat availability and use within the Tamar.