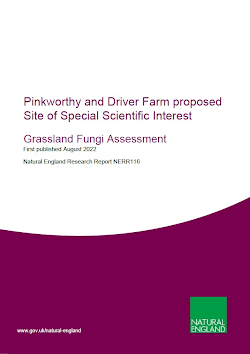 The report details grassland ‘waxcap’ fungi surveys carried out on grazing land belonging to two adjacent farms (Pinkworthy Farm and Driver Farm) in the Exmoor Natural Park. The surveys took place between October 2017 and October 2018 and identified a total of 24 waxcaps species on the site. Combined with the results of earlier survey work, the site is now considered to be of national importance for its grassland fungi.