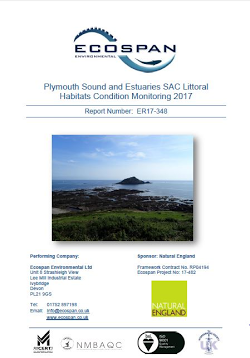 Plymouth Sound and Estuaries Special Area of Conservation (SAC) is located on the south coast of England and spans the border between Devon and Cornwall. Plymouth Sound and its associated tributaries comprise a complex site of marine inlets. The broad salinity conditions and high diversity of reef and sedimentary habitats give rise to a diverse array of communities.
Natural England commissioned surveys in order to monitor and assess the extent and condition of the littoral and rock and littoral sediment communities which are sub-features of the ‘Large shallow inlets and bays’ and/or ‘Estuary complex’ features within the SAC. Site Condition Monitoring (SCM) is undertaken to determine whether the status of the special interest features (which underpin the designation of habitats or areas) are being maintained and to guide site management action where appropriate.
Littoral rock data that was collected during the 2017 survey in Plymouth Sound and the Yealm Estuary (Sectors 1 and 3 respectively) will provide a baseline for measuring the ‘presence and spatial distribution of biological communities on littoral rock’ attribute in future years. The littoral rock baseline data that was collected in 2010 in the Lynher, Tamar-Tavy and St. Johns Lake areas of the SAC (Sector 2) has made it possible to determine that no significant changes in the littoral rock habitat types have occurred since 2010 within either the Tamar-Tavy and St. Johns Lake SSSI of the Lynher Estuary SSSI components of the SAC.
The littoral sediment data collected within Plymouth Sound and the Yealm in 2017 will provide a baseline for the assessment of the various biological communities as well as physiochemical attributes within the SAC in future. Within the Lynher, Tamar-Tavy and St. Johns Lake however, temporal comparisons have been possible between fauna, particle size and organic carbon content data collected in 2010 and 2017, despite some limitations imposed by differing analysis methods in the physiochemical data between years.
Analysis of faunal data from Sector 2 has shown that within both the Tamar-Tavy and St Johns Lake SSSI and Lynher Estuary SSSI species richness within each area overall has increased since 2010, as has the diversity in the Lynher Estuary SSSI. When considered at the Habitat type level, significant differences in community composition were observed within two habitat types within the Tamar-Tavy and St Johns Lake SSSI, and one in the Lynher Estuary SSSI. A large proportion of the temporal differences observed were found to be driven by relatively small differences in the abundances of a number of commonly occurring species. It was also revealed that a greater number of taxa contributed to the community similarities within the habitat types that had significantly changed in composition. The changes in community composition are considered to be as a result of natural variable recruitment rather than being brought about by any anthropogenic influence.
Temporal analysis of sediment granulometry and organic content has revealed significant differences in the proportions of silt and clay between 2010 and 2017. It is likely that these differences are a result of different analysis methods rather than a representation of real broad scale change.