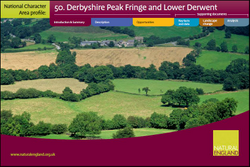 The Derbyshire Peak Fringe and Lower Derwent National Character Area (NCA) is a picturesque transitional area between the natural beauty of the Peak District National Park to the west and the largely urban, formerly mined Derbyshire Coal Measures to the east. Often referred to as the Gateway to the Peaks, this area is underlain mostly by the Carboniferous geology of the eastern Coal Measures and by Millstone Grit (sandstones) in the west – through which the rivers at the heart of this NCA have cut their valleys. Although the area was not included in the National Park, it was seriously considered during the original boundary selection in 1950 and remains a landscape of extremely high quality.
The rivers in the area are of major importance for many reasons; they drain large volumes of rainwater from the Peak District, and the River Derwent has been significant to the area’s economic and industrial heritage, having powered the early mills of the Industrial Revolution. The Derwent Valley Mills were designated as a World Heritage Site by UNESCO in 2001, celebrating the area’s contribution to the Industrial Revolution.
Further information