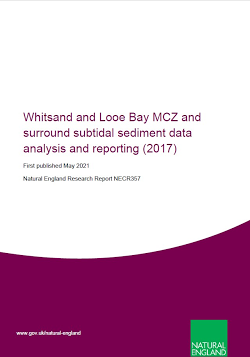 The Whitsand and Looe Bay Marine Conservation Zone, along the south Cornwall coast, was designated in 2013. The area has been monitored since 2001 by Cefas in relation to the Rame Head dredge disposal site, occurring to the SE of Whitsand Bay. An area of deep mud habitat has been observed within the MCZ boundary, to the N of the Rame Head South disposal site. This is atypical for the area, which consists mostly of coarse sediment and sand habitat. Following the MCZ designation, there has been uncertainty of the effect of the disposal upon the MCZ itself, in particular regarding the origin of the deep mud habitat. A subtidal baseline survey (sedimentological, contaminants and infauna) of the MCZ was undertaken in 2015 by the Environment Agency on behalf of Natural England. The results are interpreted here within the context of the condition and origin of the deep mud habitat, and historical data of the MCZ, Rame Head disposal site and surrounding subtidal areas (including also Plymouth Sound and Estuaries Special Area of Conservation).