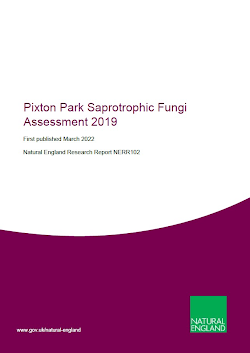 Following the recent publication of the revised JNCC Guidelines for the Selection of Biological SSSI’s: Chapter 14 Non-lichenised fungi (2018) a survey was commissioned by Tim Wilkins (Natural England, Senior Specialist, Fungi) to assess the saprotrophic fungi assemblage of Pixton Park in North Devon. More specifically the survey was targeted to investigate the oak deadwood fungal assemblage for which an updated criterion had been included within the revised guidelines for SSSI notifications.

Pixton Park is a large privately-owned ancient parkland situated within Exmoor National Park and close to the confluence of the rivers Barle and Exe. The ancient wood-pasture habitat contains a fine collection of veteran trees, particularly oak and is known to support important lichen and invertebrate assemblages. The unimproved grassland habitat within the park is also of interest and a recent survey by the Natural England Field Unit located a population of the locally rare moonwort (Botrychium lunaria) in one area. As a result of this find a secondary aim of the present survey was to assess whether the parkland pasture might support populations of declining grassland fungi such as waxcaps (Hygrocybe species).